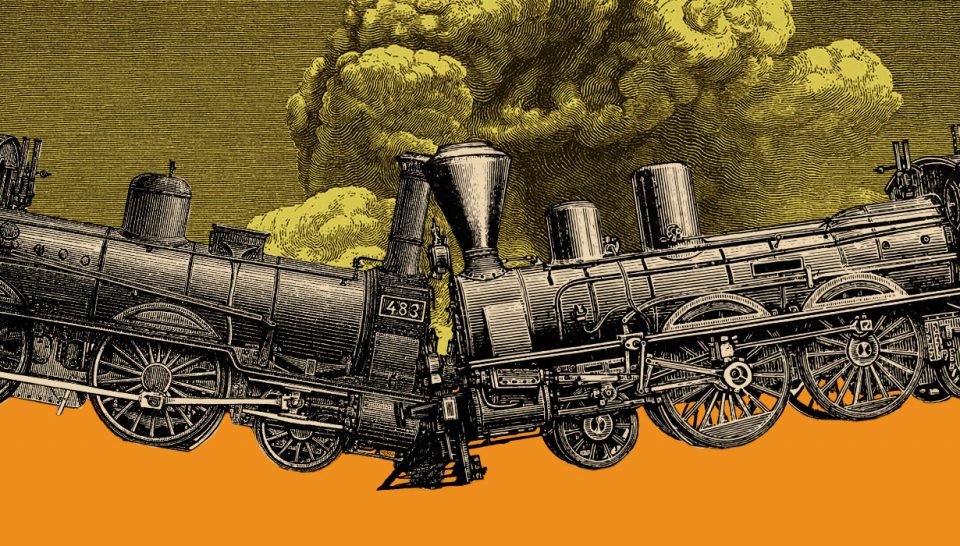 The great train crash that saved the Iowa State Fair

Every summer, when it’s searing hot and humid outside, and all across Iowa, August conversations gravitate to the latest bizarre indulgence served on a stick.

But the Iowa State Fair wasn’t always the mainstay it has become today. There was a time when it was struggling to survive, let alone thrive.

The core events—like animal showings, bake-offs, and carnival rides on the midway—will always draw a certain number of people.  But to attract an ever larger crowd and break attendance records year after year, Fair organizers have to come up with new, more amazing, never-before-seen promotional events or public spectacles. That’s a tough challenge for any marketer.

Because of that never-ending quest, we’re blessed with classic Iowa State Fair traditions like the Outhouse Races, Mutton Busting, a Mother-Daughter Look-alike Competition and—one of my personal favorites—the Cow Chip Throwing Contest. (Growing up in Missouri where my family operated a small cattle farm, I spent much of my childhood making sure I stepped around the cow patties. Why anyone would want to pick one up and hurl it like a discus is beyond me.)

Along the way, though, the Fair team has hit some home runs.

Let’s put one of these home runs—a truly extraordinary event—that essentially saved the fair. In the late 1800s, the Fair was in terrible financial distress. Organizers were having a heck of a time getting people to pay for admission. Think farmer’s market. Show up, walk around, maybe you buy something, maybe you don’t. They couldn’t figure out how to get people to pay for anything.

Along came Joe Connolly and his idea to stage an event so spectacular that everyone would gladly pay to see it.

Connolly’s idea?  Lay a section of railroad track in front of the grandstand and create a head-on collision of two locomotives, causing an earth-shaking fireball explosion the likes of which no one had ever seen.  No kidding.

The Fair got on board. Connolly bought a couple of old trains that were headed for the scrap heap, laid down some track and set the trains on a crash course.

The prospect of witnessing of a huge train wreck was too much for anyone to pass up. The first explosion in 1896 was so successful that they did it again in 1922 and 1932. Each time, the Fair drew between 40,000 and 70,000 paying visitors—huge crowds for any event in that era.

Wanting to repeat his newfound success and parlay it into wealth, Joe bought all the throwaway trains he could get his hands on and took his show on the road, staging 146 train crashes across the country over the next 35 years. Later on, he figured out how to doctor up the explosions by putting flammable materials in the back of the trains and torpedoes on the track.

In creating his train crash spectacles, Joe Connolly pushed a few of the key buttons required to create some buzz. He staged an event that was unusual, outrageous and remarkable and helped to make the Iowa State Fair a modern day must-do event.

Just like Joe, we Juiceboxers are prepared to go to great lengths to help you create some buzz for your company. Get in touch with us if you need some help coming up with clever marketing ideas that will get people talking about you.

If you’re interested in learning more about Joe Connelly and his exploding trains, you’ll enjoy watching this piece produced by Iowa Public Television.